Just write, don’t type! After all who cares? 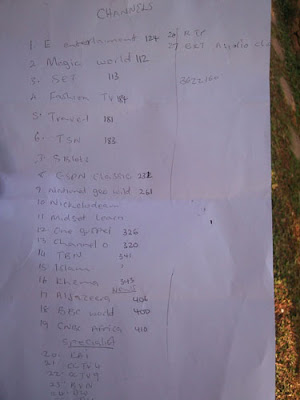 My mother loves a good movie and like me has no qualms watching a really scary horror or a flick that’s infested with pythons, crocs and komodo dragons. But unlike me, she has little time for TV or so I thought. So last year I got her the entry level package from DStv so maybe she gets a little more news from Al Jazeera than the dose she got from BBC radio.

Earlier this year she inquired about National Geographic channel and I promised to upgrade her package for her although I kept putting it off. In the past two weeks I saw an article in the press that DStv had introduced the Access package that had a good number of extra channels, including NatGeo Wild, for around $10 a month. I decided it was the time to make that upgrade. So I walked into Multichoice offices in Lilongwe last week to upgrade her service. I was told I would need to pay for the new package although there were still five months to run on the other package she already has. The customer service office tried to explain why I could not upgrade but it didn’t make sense.

Since I wanted to give my mama the NatGeo Wild she wanted I didn’t see the point in arguing. I was then given a list of the channels that come with Access. The list was written by hand on a plain A4 paper and had been photocopied! The handwriting was not necessarily the best (at least it was better than mine) and channel numbers were not indicated (the numbers you can see on the picture were written by me). This was so unprofessional!

The next day I went in to make the payment. I asked the cashier (whom I believe is a First Merchant Bank employee) how much I should write on the cheque. He quickly turned to his colleague and asked “kodi cheque chitheka?” (will paying by cheque work?). They discussed and then me mulled over it for such a long time I could sense Christmas was fast approaching. As I was about to pose my question again he shouted “K1,700!”. I can’t recall the last time a dollar fetched K170 but I wrote the cheque anyway and he produced a hand written receipt! Had he not stamped the receipt I would not have accepted it.

I concluded that someone at Multichoice rushed to the press to announce this new product. They obviously had not communicated internally in good time either. There were no brochures neither was the product setup in the system. Or they simply do not care anymore after all there is no competition! A typed list of channels on headed paper would have at least been nice. The confusion about cheque payments was also unnecessary. It all left a really bad taste in my mouth … the kind when you eat a rotten roasted peanut! Multichoice can do better, much better actually!