This weekend the Google Technology User Group (GTUG) Lilongwe held a meetup to discuss Google Mobile Tools. The meeting took place at Baobab Health offices and attracted some 20 techies although sadly only three of them were ladies. The number of ladies who attend IT related functions have always been poor and it probably points to the fact that very few ladies are actually working in the IT field. We were, however, happy to have in our midst a media studies student who also runs a mag 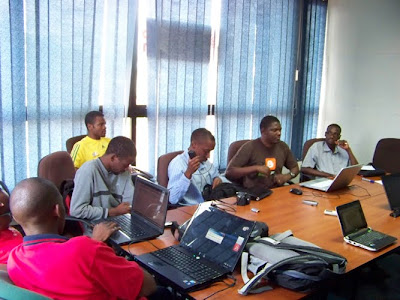 azine called Afrocentric. Another participant was a non-IT student but is currently researching on Google. I didn’t manage to find out what exactly he is researching but assume he is doing a lot of Googling!

The meetup started with an overview of the mobile market in Malawi. There is a general lack of information on mobile users except the number of customers the main providers claim to have. I have tried to get information on mobile internet usage from both TNM and Airtel and hit a wall at both. Soyapi Mumba, software development manager of Baobab Health then introduced the subject of developing downloadable apps or simply developing HTML 5 websites that provide better functionality over current pre-HTML 5 websites. Charlie Maere, IT director of Kamuzu College of Nursing, said developing apps in J2ME could still be a solution as most mobile devices can run such apps.

Charlie explained that the likes of Facebook, Google and Yahoo! started by providing services for free and maybe we should work on such type of model. Kondwani Hara, an independent IT Consultant, suggested the use of Airtel Money (formerly Zain ZAP) while others suggested using an SMS based model. Charlie and Tiwonge then went on to explain that Airtel mobile services really have some innovative services but that they didn’t know about until a foreign national used it to confirm his airline booking! 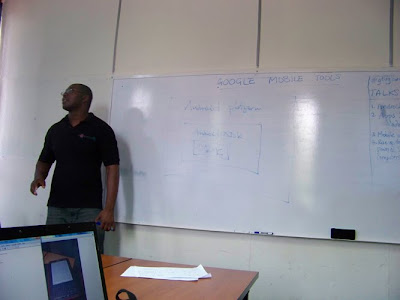 I introduced a ‘filler’ on Android tablets. At the recent Consumer Electronics Show in Las Vegas in January we saw the launch of a multitude of Android-powered tablets, most low cost. Are we likely to see some of these devices finding their way to Africa and Malawi? Are tablets really going to be a big hit in Malawi or will netbooks be the ‘smallest’ devices we will ever see? Some thought tablets will eventually infiltrate the market although the iPad won’t be a big hit like it is elsewhere because it is relatively expensive and the platform is closed as compared to the Android ones. It was also noted that Blackberry’s Playbook will allow Android applications to be installed on their devices, an indication of sorts to the influence of the Android.

Yamiko Msosa gave a history of how mobile apps started. He took us through early day chatting apps to present-day more complex apps. The rise of innovative banking mobile services was discussed with one techie giving some interesting features of First Merchant Bank’s mobile service. 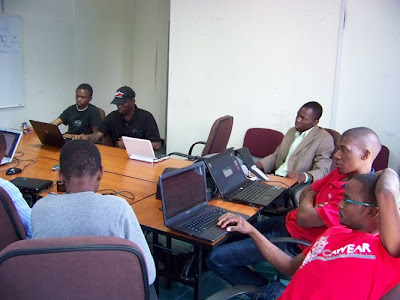 Soyapi gave a brief overview of Google’s Android platform. He explained that in comparison to Apple’s platform, Android is open and based on Linux. once users of Android mobile devices log in to their Google accounts they have access to their Google applications like Gtalk, Calendar, etc. Soyapi gave an overview of apps on his Nexus One like the Accelerometer, 1D and 2D bar code scanning, Astrometer, Latitude & Foursquare, Foodspotting and Bump. He explained that we are really limited by our imagination on the apps we want to build. I gave an example of ww.theinternetwishlist.com where people give ideas of what they want the internet and apps of the future do for them. Yamiko Msosa detailed an innovative web app used by a car rental firm in Europe that uses location-based services to allocate vehicles closest to their customers, allowing them access to the cars and other interesting services.

Kondwani Hara told the grouping that Android’s open platform exposes it to risks where developers add malicious code to their apps that can be pushed to your mobile handset. He explained that certificate authority’s help to flush out such apps and suggested that Malawi should have it’s own. Some techies objected to the suggestion of owning to the low number of apps currently being developed locally.

After some pizza and soft drinks (no coffee!), Yamiko gave a lecture on how the Android platform, SDK and ODK works. He then took us through a demonstration on how to install it and write simple ‘Hello World’ code.

And there ended our day. The Lilongwe Google Technology User Group next meets next month for a movie night. Details of location and time will be available from the GTUG Facebook page soon.

For the love of food and music 🍹🍺🍗 @tumai

Those five days after the weekend... ayayaya, they

Early morning activity, or the lack of it, in a vi