A Bingu in Medvedev? 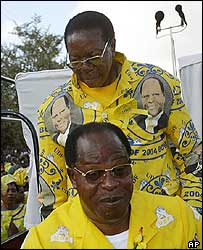 A few weeks ago there was a debate on BBC World radio about the US presidential race. One analyst cased his doubts on Barack Obama’s foreign policy experience. He expressed worry about what Obama would say when he would sit across the table from Vladimir Putin. The anchor reminded the analyst that Putin would be long gone by then. The analyst replied ‘Well, Putin will be sitting right behind his successor’.

Dmitry Medvedev is now president-elect of Russia and like Malawian president Bingu wa Mutharika, the former deputy prime minister was picked from relative obscurity to be the pall bearer of the ruling party. Like in Bingu and former president Bakili Muluzi’s case, President Vladimir Putin has been appearing at most public functions and campaign rallies with Medvedev (some people have even said that Medvedev has started to walk and talk like Putin). Both Bingu and Medvedev were chosen over more ‘obvious’ candidates for the job. Muluzi basically overshadowed Bingu by retaining the all powerful position of UDF national chairman where Bingu was an ordinary executive committee member. Muluzi negotiated with bitter loser Gwanda Chakuamba on behalf of the president and rumours flew around that he also tried to fix the composition of Bingu’s first cabinet. In Russia, Putin will remain a strong figure in the name of Prime Minister and Medvedev has already promised to tow the Putin line.

So are we likely to see a Bingu emerge in Medvedev? The Medvedev – Putin scenario seems no different from our local situation with one exception. Muluzi left office a largely unpopular figure. He twice tried to tamper with the constitution to allow him rule indefinitely. He presided over a government riddled with allegations of corruption, nepotism and financial mismanagement. Muluzi went from near bankrupt to multi-millionaire during his ten year reign acquiring real estate and a neat collection expensive cars. Many Malawians were happy to see the back of him. When Bingu decided to pour scorn on Muluzi and ditch the UDF he knew he had the sympathy of the majority of Malawians. In Russia Putin has also accumulated a considerable amount of wealth in the energy sector and some estimate his wealth at around $40 billion. There have also been allegations of dwindling democratic and press freedoms during his reign. But unlike Muluzi, he has presided over a period of strong economic growth and growing influence in Europe and beyond. Putin’s popularity soared to the extent that most Russians would have loved him to continue to serve as president, a temptation he never fell for.

So are we likely to see Medvedev shedding off Putin and running his own show? Not very likely!

For the love of food and music 🍹🍺🍗 @tumai

Those five days after the weekend... ayayaya, they

Early morning activity, or the lack of it, in a vi